Across northwest Wisconsin, farmers in four local watershed councils volunteered to participate in a light-hearted competition aimed to turn some heads and crudely measure soil biological activity as a proxy for soil health.

The Soil Your Undies Challenge is pretty simple: Bury a pair of underwear in a crop field in the spring, then let the soil microbes work on them for 50 to 60 days. The cotton in the underwear, a natural fiber, is capable of quick decomposition in that time, as long as there is plenty of microbial activity.

Luckily, we’ve had a bountiful harvest of some super soiled Hanes.

Between May 25th and June 17, we planted 30 pairs of underwear across 4 counties, noting field cropping history and tillage at time of planting. We dug them up between July 22nd and August 3rd.

Unfortunately, we lost a couple of pairs – fields look awfully different after 60 growing days, and our markers were pretty difficult to find in eight-foot corn. Picture me, crawling between corn rows on hands and knees, looking for small pink flags and futilely checking “before” pictures of the field to triangulate their locations. To my credit, and more so to the farmers’, we found almost all of them.

Each pair of briefs we dug up has told an interesting story. In general, the fields that had a longer history of no-till and reduced tillage had better breakdown than those with more cultivation.

Mike Wold, who farms in Dunn County, has been mostly no-tilling his fields for 20 years, and his pairs were some of the most degraded. Taking the cake, though, was a pair in Pierce County that was buried in a field that has been in USDA’s Conservation Reserve Program (CRP) for the last 40 years.

We also learned that moisture matters. More than one farmer called halfway through the challenge to say, “We haven’t gotten any rain. That underwear is going to be as fresh as it was when we buried it.”

Those farmers were all surprised at what their soil did to the undies even during a dry season.

Fields under irrigation, even with some tillage, had shredded the tighty whities. However, dry fields without living roots in the ground decomposed less cotton, as shown by test plots at Mann Valley and Horse Creek.

But truly, even with more tillage and less crop variety in the rotation, farms with cow manure incorporation had a lot more breakdown. This wasn’t as true for incorporated turkey litter or even hog manure.

A great comparison occurred at the Cormican Farm in Glenwood City. Andy and Don planted underwear in two fields very close to each other. Both were no-tilled and had cover crops last year, but in one field their cattle had grazed off the covers, and in the other the covers were terminated chemically in the spring at two feet tall. The undies in the grazed field were a lot more deteriorated than those in the ungrazed field.

So some underwear broke down more, why does that matter? In short, healthy soil is more resilient to weather and can hold more nutrients than inert soil. In other words, the more soiled the undies, the healthier the soil.

How does that work? Mostly soil structure and water absorption. Organic matter, such as roots and microbial colonies, create structure by literally gripping soil and absorbing water instead of allowing it to run over the surface. That makes healthy soil far less likely to erode during rains or blow away with the wind.

Is it as simple as it sounds? Of course not.

Soil scientists note that biological breakdown can be slower in some very healthy soils because of a higher fungal activity. Soil fungus is great for soil structure and nutrient availability to plants, but it is a slow decomposer and takes more time than soil bacteria to break down material.

More scientific measurements can provide a ratio of fungal versus biological activity in the soil to folks who really want to get a better peak under their dirt. For the rest of us, we can use Hanes to get a general idea of how our soil is doing.

One farmer who applied fungicide had a LOT of underwear breakdown, and perhaps killing the fungus made more room for the bacterial colonies. Another who has been using lots of biologicals had fantastic looking crops and extremely high biological measurements, but had very little underwear breakdown.

Burying underwear isn’t a perfect test of soil health, and this isn’t an exact science. But the Soil Your Undies Challenge has shown general trends that more soil health practices are associated with more decomposition.

Does more underwear breakdown translate to better crop yields? We don’t know yet. We’ll try to do some rough tracking at harvest time. But of course, yield is dependent on hundreds of different factors, especially rainfall.

Does more corn mean less underwear? Like many of the underwear we pulled up, the well of jokes on this subject is bottomless.

Just for fun, here were the choices for this post’s headline that didn’t make the cut – perhaps you can see why it was hard to decide on the winner! 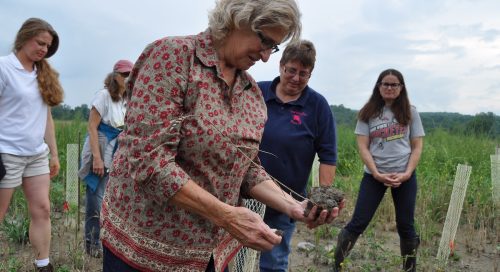 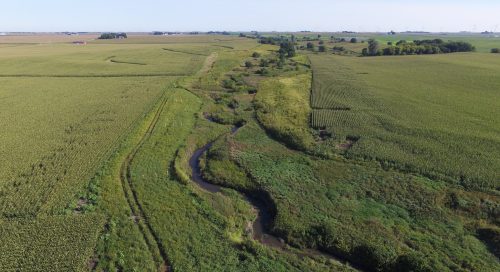 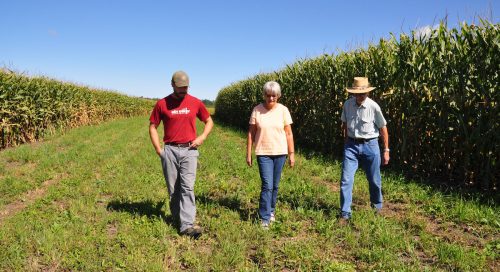